Posted on December 3, 2016 by climanrecon

This post presents the electricity data for South Australia (SA) for the days leading up to a localised blackout that occurred there in the early hours of 1st December 2016. The data suggests that there was an interruption to the supply of around 200 MW via the Heywood interconnector with Victoria, with no obvious cause within South Australia.

The following figure shows SA wind power for the 10 days leading up to December 1st, separated into 3 groups, corresponding to the 3 clusters of wind farms in the state:

The following two figures show the various contributions to electricity supply for the 29th and 30th November, extending 1.5 hours into the following day: 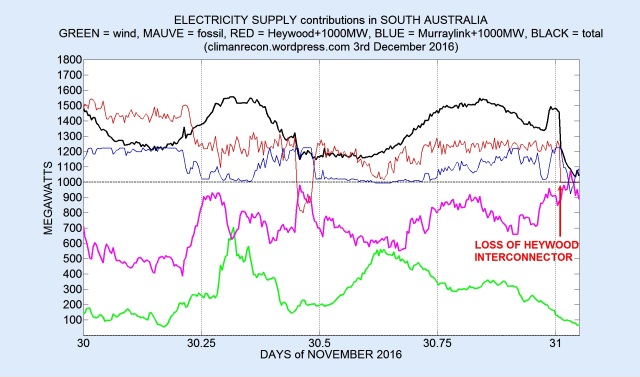 There is no obvious cause within SA of the loss of supply from the Heywood interconnector shown on the second figure. Note that the sudden rise in consumption (the black curve) shortly before midnight is a regular event caused by domestic water heating.