The Christmas 2016 holiday period was quite eventful for electricity generation in the state of South Australia, first of all there was a collapse of wind power on what may well be the hottest day of the summer (41.3C Tmax at Adelaide Kent Town on Christmas day), then a few days later there was a collapse of many transmission lines during a storm, with many homes and businesses losing power. This post shows the 5-minute electricity data from AEMO archives for the period of 23rd to 28th December, starting with total consumption (black), wind power (green) and residual demands on non-wind sources (red):

The figure above shows that wind power (in green) was all but absent during daylight hours on the hottest day (25th), but then suddenly increased in the evening, a phenomenon seen in many previous heatwaves. Demands on non-wind sources were therefore very high on Christmas day, and would have been even higher if the heatwave had fallen on working days. Demand on non-wind sources dropped to very low levels on 27/28th as the storm passed through.

The following figure shows the synoptic chart for Australia for 5pm (AEDT) on Christmas day, suggesting light winds at that time in South Australia in the absence of any other influences: 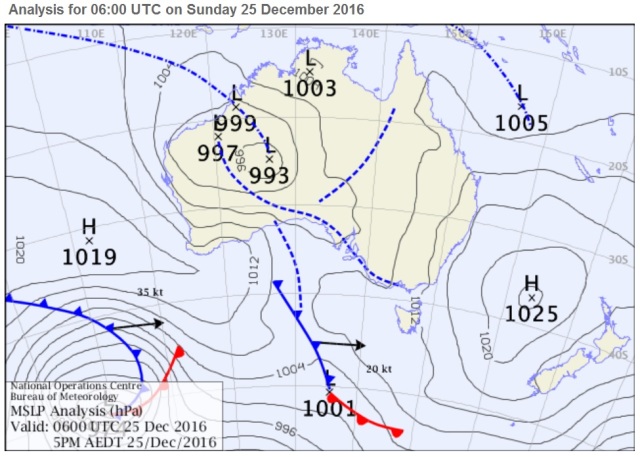 The wind power produced in South Australia is clearly influenced by the large scale synoptics, but there must be other influences that cause the rapid diurnal variations, not present in synoptic charts.

The fluctuating wind power is now a major driver of variations in the other electricity supply components, as shown by the following two figures, for interconnector flows (positive = import), and for local conventional generators: 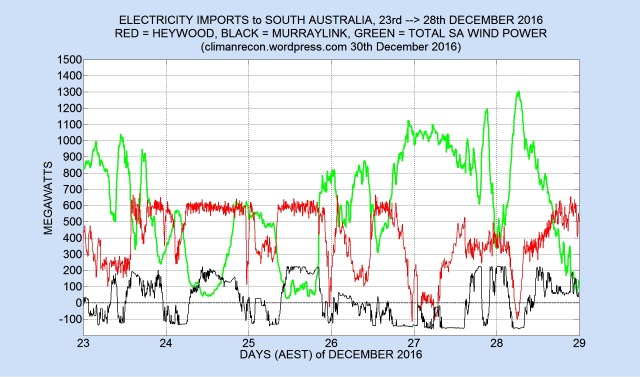 It can be seen in the figure above that when wind power is high (most of it comes from the hills near Adelaide), as much as possible of it is exported via Murraylink, and import via Heywood is reduced.

The figure above shows that the concept of baseload power is all but dead in South Australia. Torrens Island (black curve) is still the main load follower, but wind power sometimes forces the other major generators off the system. Note that during the stormy evening/morning of the 27/28th Torrens was the sole conventional generator producing electricity, a mere few hundred MW; given the “system black” produced by the previous storm (at the end of September) this is somewhat surprising, but the sudden switching off of Osborne (blue curve) on the 27th may have been a response to the loss of load caused by multiple transmission line failures.

Returning to the subject of understanding the diurnal fluctuations in wind power, the following two figures show the wind power produced by each wind farm: 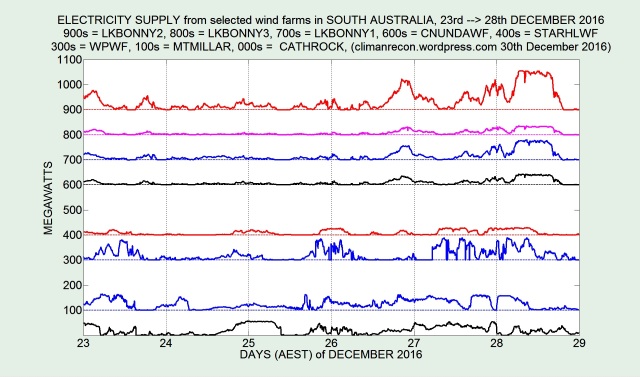 The wind farms in the hills North of Adelaide are all shown in the figure directly above, with two low wind periods marked “A” (on the 24th) and “B” (on the 25th). Christmas eve looks like it was a relatively average hot day, with low wind during the day, but picking up at night. In contrast the wind power on Christmas day was quite exceptionally low during most daylight hours (only around 50 MW at the time of highest demand), but with a sudden and large increase in the evening across most of the wind farms in the area North of Adelaide. This may be the phenomenon known locally as “gully winds”.

Christmas day 2016 is an important sample in the distribution of wind powers on heatwave days, suggesting that the “capacity credit” of wind power in South Australia cannot be set much higher than 50 MW.

3 Responses to Christmas 2016 in South Australia