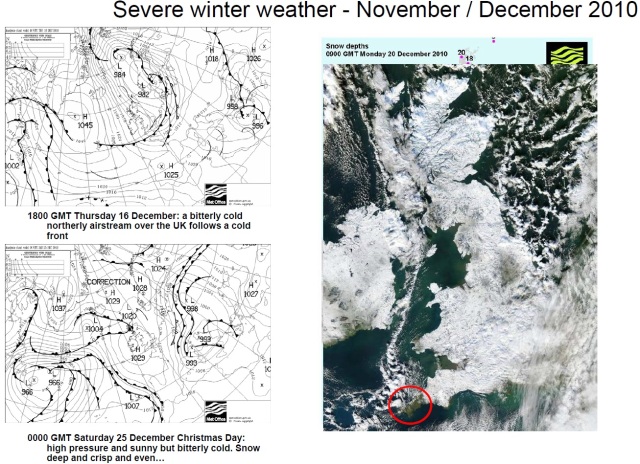 This post documents a review of a recent paper published in Environmental Research Letters about GB wind power and electricity demand:

I was alerted to the publication of this paper by a post about it at the “Energy Matters” blog by Roger Andrews: http://euanmearns.com/peak-demand-and-the-winter-wind/

The paper has generated some hype and fake news, such as this from “energylivenews”:

This post attempts to provide a more accurate description of what the paper says, and what it does not (but should) say.

The authors of the paper are all meteorologists or climatologists. The meteorological aspects of the paper are excellent, especially the insights provided into the particular weather patterns that lead to most cold spells and associated high demands for electricity. The absence of electrical engineering input is apparent in the incomplete analysis of the contribution of wind power to meeting future peak demands.

The paper quantifies how well current wind power deals with an old problem (high demand during cold spells on a system without wind power) but fails to quantify how additional wind power would contribute to solving current problems. Current GB wind power already has more than sufficient capacity to deal with the relatively small excess demands that appear to occur during some windy cold spells, so windy cold spells are no longer a problem. In fact, the current nameplate capacity of wind power of around 15GW (metered plus embedded generators) is so large that it has shifted the current problem (the peak demands placed on the rapidly diminishing conventional sources of supply) to times of such low wind conditions that additional wind power capacity will have negligible effect on the current capacity problem for the foreseeable future.

The following figure shows how the analysis could be improved to draw appropriate conclusions about additional wind power: 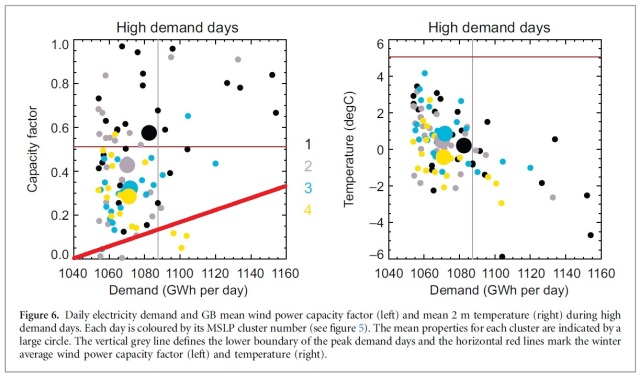 The figure above has been copied and pasted from the paper, with the addition by me of the red line, which provides a rough estimation of where the current problem lies, the peak demands that conventional sources might be expected to have to meet when cold spells fall on working days. The slope of the red line follows from the current total nameplate capacity of GB wind power. I have assumed that the conventional sources can supply 1040 GWh per day, so the red curve starts at that level. As total wind power increases higher total demands can be met thanks to the wind contribution. The current problem is events below the red line, several of which had very low wind power. Those very low wind power events had a BIT less demand than the highest but a LOT less wind power than the average, and that is the current peak capacity problem, and additional wind power will not solve it.

The figure above can be used to see the outcome of several what-ifs. If demands increase (such as via increased electrification of heating and transport) then many more events will move to the right into the danger region. If more conventional supply is lost then the red line will move to the left, bringing many more events into the danger region.

What-if more wind power capacity is added? Suppose that an extra 1.5 GW (nameplate) is added in the next few years, will that improve the security of the GB electricity system? The answer can be seen from the effect on the red line, whose slope will merely decrease by 10% (since total nameplate capacity has risen by 10%), making very little difference to the problem area below the red line.

Wind power enthusiasts may be tempted to argue that there is very little in the way of events below the red line so there is not much of a capacity problem, especially when more wind power is added. There are two problems with that argument, firstly that the temporal resolution (daily wind averages) used in the paper underestimates the number of events below the red line (more on that below), but even if that issue is minor the capacity problem includes the large number of events that are poised to enter the danger region via a rise in demand and/or a fall in conventional supply. Wind power has changed the statistics of the supply/demand balance, but that change in statistics has now all but stopped, and somehow the rapidly falling conventional supply has to be reconciled with the expected rapid rise in demand.

The reanalysis data used, from 1979, includes long periods of relatively mild (and presumably windy) winters in the UK, and this is likely to have biased the statistics in the over-optimistic direction. The following figures show HadCET data for daily winter maximum and minimum temperatures from 1878, with exceptionally cold days shown with blue markers. 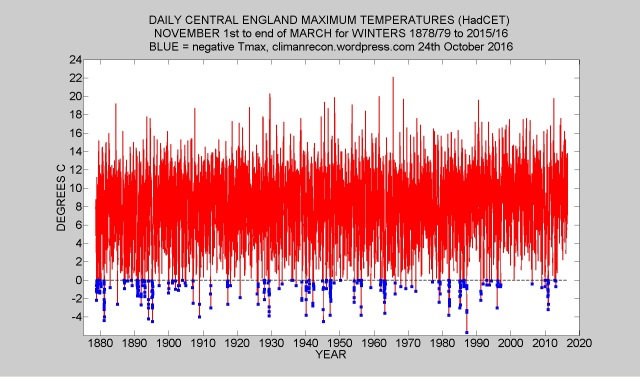 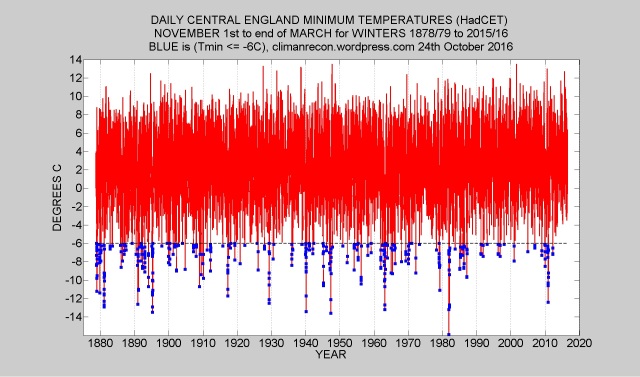 Finally, the paper uses daily average wind power, when it should have made an attempt to estimate wind power at the critical early evening period, when peak demands occur. Critical events with wind power lulls in the early evening will have been biased towards higher apparent wind power by the use of daily averages. There would be many more dots below the red line in Figure 6 of the paper (shown above) if the analysis had been done at a finer resolution, with Roger Andrews showing example data at 5-minute resolution from a particular cold spell in his blog post cited above.