“When breakpoints are removed, the entire record prior to the breakpoint is adjusted up or down…”

Many people suspect that there are inaccuracies in the major homogenisations of instrumental temperature records. This article asserts that there are substantial errors resulting from the homogenisation procedures commonly employed, and provides a general explanation for them. In short, there are many transient perturbations in temperature records, and the homogenisation procedure over-corrects for many of them. I am currently quantifying this over-correction in the ACORN-SAT version of Australian surface air temperatures, and hope that this article will inspire others to help, or to look at data from other countries. The article is based on knowledge mainly of ACORN-SAT, but there is no reason to suppose that the conclusions do not apply generally.

First of all the following figure illustrates why raw data has to be adjusted to reveal the true background temperature variations. The objective is to obtain the temperatures that would have been recorded in the past if the weather station had been at its current location, and with its current equipment. The figure below shows a typical history of the difference in effective temperature calibration between the past and the present: 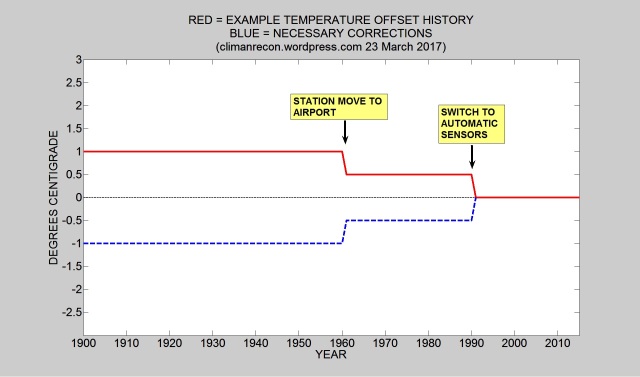 Station moves and equipment changes are the typical causes of sudden and persistent changes in temperature relative to neighbours, events that computer algorithms are good at detecting and correcting. If that were the whole story then everything would be fine, but things go rapidly downhill from this point on.

The main problem for large-scale homogenisations is that there are many “transient” (rather than persistent) perturbations of temperature. The computer detection algorithms still work to some extent with transient perturbations (though it would be better if they failed to work), but they cannot do the correction part of the procedure without adult supervision. The outcome is illustrated in the following figure, showing two typical transient perturbations, and the erroneous corrections that they generate: 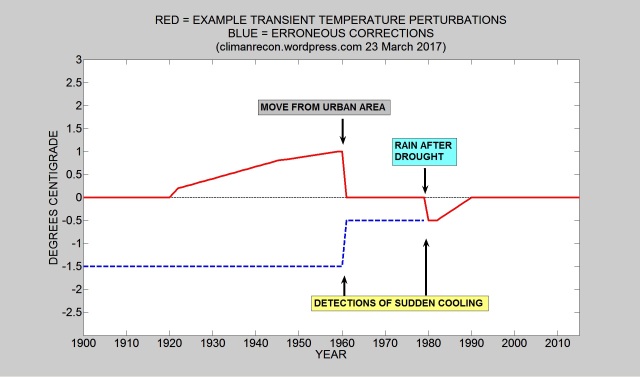 The problem arises when only one end of transient perturbations get detected, the procedure assumes that the transients are persistent, and therefore over-corrects the data before the transient.

It is likely that the most common transient perturbations of temperature involve sudden cooling, for example from the following mechanisms:

There can be sudden warmings, for example when thermometers are removed from a shaded location, there is sudden screen damage, or a building  is erected nearby, but the other end of those transients are probably more likely to be detected than in the case of sudden coolings. It seems likely that poorly corrected transient perturbations give a bias towards cooling of the early part of temperature records.

There is always scope for improving computer algorithms, but I think that the problem lies with the functional design of the homogenisation procedure, which needs more involvement of expert analysts and less blind faith in what the computer says. The analysts need to examine rainfall data to remove false detections from that source, and they need to look over long periods of time to find both ends of transient perturbations. As the main interest in long temperature records is the end-to-end variation of temperature it may be OK to leave transient perturbations in place, but note that mid-20th century urban warming can convert cyclic variations of temperature into hockey sticks.

I am continuing a review of ACORN-SAT data, trying to separate its step change detections into two groups, those resulting from persistent changes (which need correction), and those resulting from transient perturbations, which don’t need correction. I hope that this article will encourage people to examine data from other regions, to determine the extent of climate distortion introduced by the homogenisation process.