This post gives a status report for Tasmanian electricity, six months after the restoration of Basslink, with the relatively dry season underway. The news is good for both Tasmania and the NEM, the hydro storage reservoirs have been replenished by a wetter than average winter and spring, and Tasmania will be able to meet its summer demand as well as being able to  export some electricity during high demand periods on the mainland.

The following two figures show the storage histories for the hydro basins up to 5th December, showing substantial recovery from the extreme lows of March: 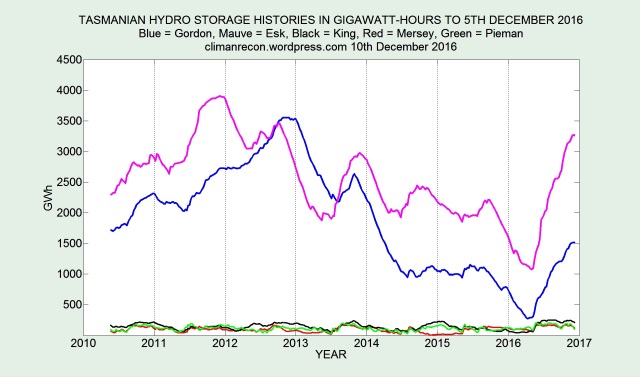 The following figure shows the daily average, minimum and maximum total generation within Tasmania for 2016:

Basslink was down until 13th June, so the data before then reflects the daily variation of demand within Tasmania, with a rising trend as the weather cooled. In the second half of the year Basslink import/export was largely neutral, but with two periods of modest net import, in September and November/December.

The following figure shows the daily average MW generation from the Gordon and Esk hydro basins, the ones with large reservoirs:

The large reservoir hydro basins provided a substantial proportion of demand during summer 2016, but were able to replenish after the summer thanks to the emergency gas/diesel generation, the restoration of Basslink, and the usual mid-year (wet season) surge in output from the smaller basins, shown in the following figure:

The figure above explains the dips in total generation, which reflected low output from the Derwent and Pieman basins. The final figure shows the wind farm and fossil fuel generator outputs:

The figures above show that peak summer demand in Tasmania is around 1200 MW, and that Tasmanian generators are capable of producing around 2000 MW, so Tasmania will be able to be an exporter to the NEM during mainland heatwaves this summer, the amount available for export depending on how wet it is in Tasmania at the time. The most recent summer heatwave export of electricity from Tasmania was in December 2015, with the following figures showing how it was achieved (during what was a relatively very dry spring/summer): 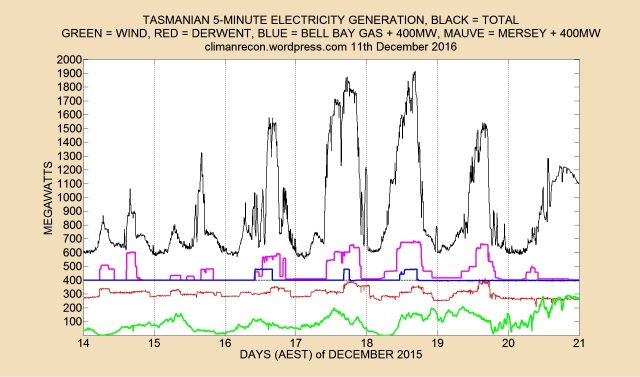 Basslink was working during the period of the data shown above, and Tasmania imported during the night, and exported at the times of mainland high demand, with some of the hydro basins turned off at night, then generating strongly during the day. There is no obvious reason why Tasmania will not be able to repeat what it did in December 2015 and generate and export a surplus of around 500 MW during mainland heatwaves.