Following the recent closure of Northern Power Station (coal) the remaining unsung hero of electricity generation in South Australia has to be Torrens Power Station, currently able to supply 1280 MW of dispatchable power. We have seen in a previous post that almost the full output of Torrens was used during the last major heatwave in South Australia, in December 2015. This post shows how Torrens also does most of the routine load following, whilst other generators maintain almost steady outputs.

The following series of figures show the contributions to total supply in South Australia during four Thursday mornings in April 2016. The pattern to look out for is that Torrens (the blue curve) always increases its output sharply at around 6:00 am, faster than the rate of increase of demand; its output reduces somewhat after this early morning peak, but in a way that appears to the author to be risky to power stability. 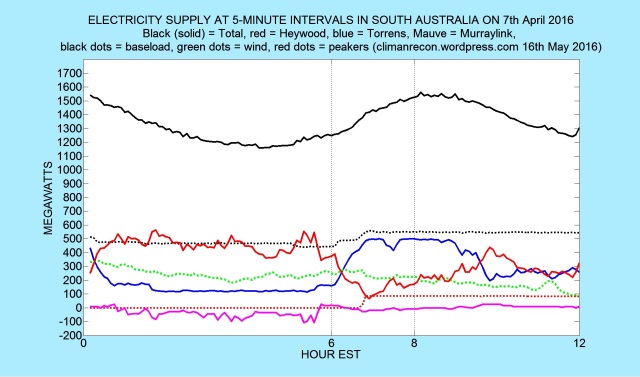 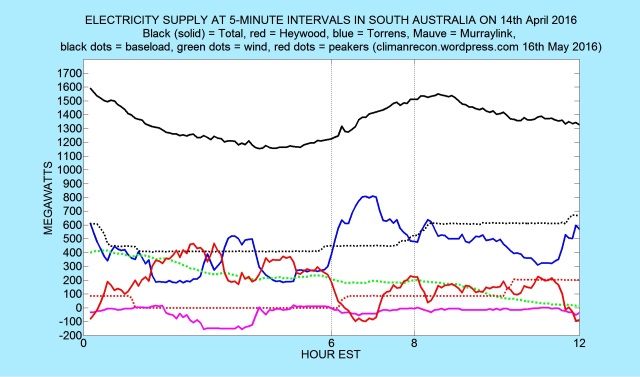 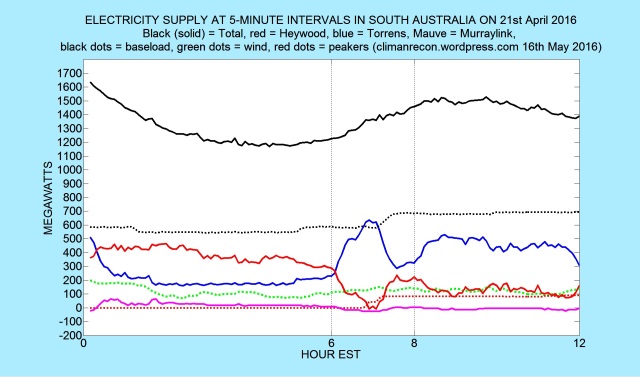 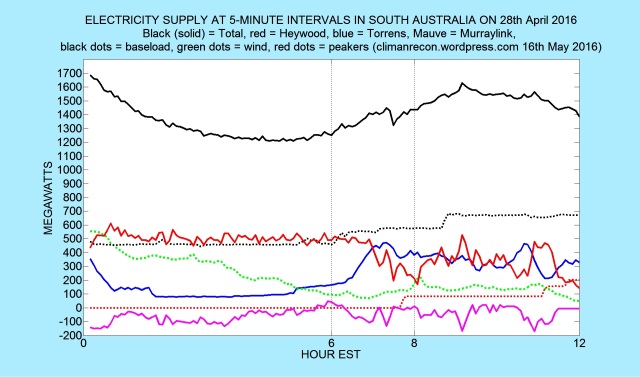 The most consistent feature is the sharp increase in Torrens output at around 6:00 am, at a rate faster than the rise in demand. This sharp rise has the effect of reducing power import on the Heywood interconnector (red curves) from near its maximum of around 500 MW, possibly a sensible thing to do at the start of the morning rise in demand, allowing the Heywood input to fluctuate upwards if necessary.

Typically the Torrens output starts to reduce around 7:00 am, a time when demand is still rising, which seems to the author to be a risky thing to do, and which might have contributed to the power outage on the Adelaide electric railway system on 28th April (the last figure shown above) at around 7:30 am.

On windy days Torrens is also the main generator that adjusts its output to maintain total supply in response to fluctuations in wind power.

South Australians should be very thankful that their elderly workhorse power station is still operating, but there are questions about how it is being controlled during the morning rush hour.

Baseload data is taken to be the sum of Northern (still operating at the time), Osborne and Pelican Point. Peaking data is the sum of all generators that are not Torrens, wind or baseload.