This post shows evidence for the onset of anomalous warming from  around 1925 in the raw monthly Tmax data recorded at Melbourne Regional Office.

Whilst checking monthly Tmax data from stations in the Melbourne coastal area (those near sea level, not in the nearby hills) I have discovered evidence for anomalous warming at Melbourne Regional Office (86071) from around 1925. Stations used in this analysis are shown in the following map, derived from the BoM website: 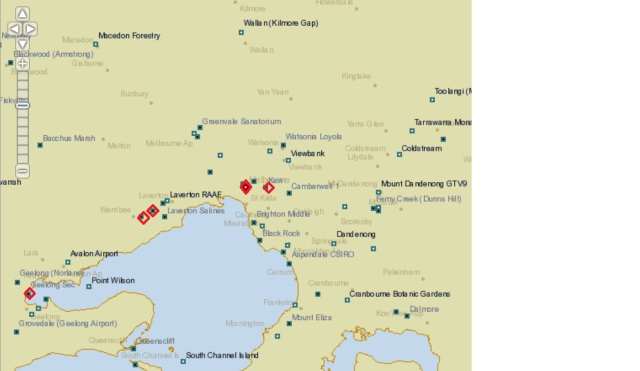 The following figure shows anomalies (with +/- 2C offsets) of 12-month moving averages of monthly Tmax data, for the stations given above (upper set of lines), and for the coastal stations of Cape Otway (90015) and Wilsons Promontory (85096) (lower set of lines). 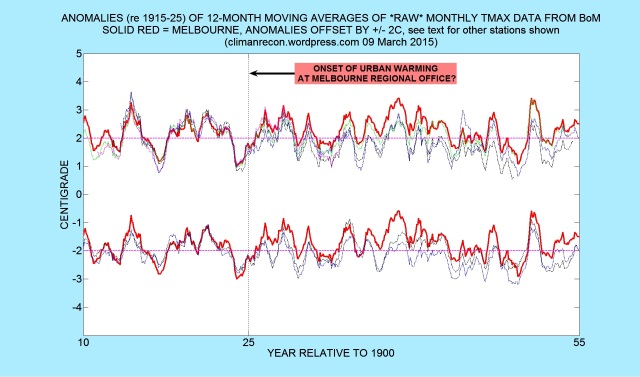 For both sets of stations (upper lines for the nearby ones, lower lines for the coastal stations to the South), it can be seen that the data for Melbourne Regional Office has maintained its warmth throughout the period shown (1910 to 1955), whereas the others cooled somewhat after about 1925.

This anomalous warming at Melbourne Regional Office will have to be borne in mind when drawing conclusions from climate reconstructions and claims of temperature records. The seasonal variation of the anomalous warming will be shown in later posts.